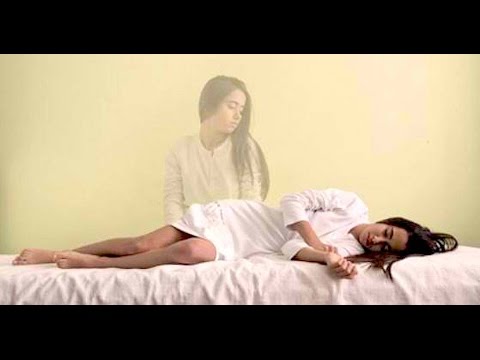 So I thought I was having a stroke the other night. Turns out it was a passed loved one visit. The ghost of my dead friend decided to visit me in a rather unusual way.

My dearest, soul mate/friend Kathryn passed away several years ago from cancer. My heart literally broke when we found out her cancer had spread throughout her body, that’s how close we were.

After she passed her spirit came to me in my dreams a few times and we talked. One day, while I was fully awake, she actually astral projected me to a place we were both familiar with and loved, I think because she missed me. Each time I was grateful to see her but devastated. Then, one night, she appeared to my daughter and told her, in her dream, that she couldn’t keep coming to me as I wasn’t moving on from her death. True to her word she hasn’t shown herself to me in the dozen years or so since.

So a few nights ago this happened.

I was sound asleep when something woke me up. I opened my eyes and immediately saw movement in the darkness. A white line, like a chalk line, was forming in the air at the foot of my bed. It was the figure 8 or the symbol of infinity forming over and over as it rotated creating a ball of infinity. It then began creating the shape of a mannequin without the head. In it’s left hand a large feather began to form. At this point I closed my eyes and when I opened them it was gone. This left me a bit freaked out but I ultimately decided it was a dream and went back to sleep.

Some time later I awoke again. This time my head was positioned so I was looking up at my headboard. There, between the headboard post and my table lamp the chalk line began to manifest again. As before, the rotating infinity ball appeared and the woman formed but this time it included the lower jaw with her mouth. The mouth was moving. She was trying to say something to me but I couldn’t hear a voice. I closed my eyes and reopened them and, as before, it was gone.

Am I Having a Stroke?

At this point I’m really starting to get scared. Since I’ve had issues with my heart that could, potentially cause blood clots, my greatest fear is having a stroke. My son bought me an alarm system for this reason. I have an alert necklace which I keep on my bed post within easy reach while the receiver is in my roommate’s bedroom at the opposite end of the house.

As I lay there assessing my situation I’m trying to remember what the signs are for a stroke. The first I think of is garbled speech. I realize quickly this knowledge does me no good as even if I talk out loud it’s going to make sense to me. I ask myself, am I having a headache? Are all my limbs working, etc. Do I use my necklace and wake my roommate or not?

Eventually I calm myself down. It doesn’t appear I’m having a stroke. I decide if it keeps happening I’ll get myself to the hospital. I go back to sleep with no more incidents that night.

The next day I went about my business as if nothing happened but I was a bit afraid the specter would return.

I go to bed rather late as I’m stalling what I fear may be the inevitable. After spending a few hours opening and closing my eyes, hoping with all my might NOT to see anything, sleep claims me and I drift off.

Sure enough, I wake and there on my curtains the white line begins. I calmly watched as it formed into a typical rudimentary drawing of a daisy. each pedal perfectly formed and in front of it the individual pickets of a picket fence form. I closed my eyes, strangely at peace with what turned out to be the last drawing I received.

The next morning I feel it’s imperative I tell my roommate what’s been happening so she knows what I’d been experiencing should this be a lead up to something serious. I share my concerns about stroke and also my thought this could be Kathryn’s spirit trying to communicate with me. She’s not sure what’s happening but doesn’t think it’s a stroke as there are no physical or mental indications she’s able to see in me. As to Kathryn’s spirit, she concedes that could be a possibility.

Next I call my daughter as I feel she needs to know as well. It’s during this conversation, when I’m explaining what I saw that it suddenly occurs to me the feather was a peacock feather. Once I had that realization I could see it all for what it was.

Kathryn had this inexplicable love affair with peacocks. She was constantly buying and replacing them on her farm. When she passed, I claimed a whole vase full of her feathers which is in my living room right next to where I sit every night as we watch TV. In fact, one of them has recently been sitting in such a way that it’s been touching me.

Remember she said she couldn’t keep coming to me? I believe the mannequin form was her way of getting around her own rule. Then there’s the flower and picket fence. Kathryn had tons of flowers, LOVED flowers and she surrounded them with a picket fence to keep the horses and cows from eating them.

My daughter was freaked out about what I’d just told her. She also happens to be a very proactive researcher. After our telephone conversation she got busy. First she texted me an article on Hypnopompic Hallucinations. Fascinating information and completely plausible.

Then she sent one that says “If someone offers you a single daisy in your dream, it indicates his/her love for you in your waking life.” Wow. Then she sends, “Fences hint at separation so if you are missing someone then the fence could depict that feeling.” Remember I told you she astral projected me because I thought she missed me? In life she would call me and those would be the first words out of her mouth, “I missed you.”

I asked her to look up the infinity symbol, she wrote, “Means never ending love.”