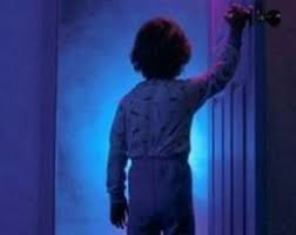 Growing up I spent a lot of time with my oldest sister and her family.  She was fifteen years older than me and her oldest child was only four years younger so I almost fit in as the oldest child in her family, and a great built in babysitter.  I would have said I knew pretty much everything about them but what I didn’t know about were the phantom footsteps.

When I was about sixteen and my oldest nephew was 12 or so, I babysat.  At the time they lived in a typical 1960’s ranch style home.  You entered into the living room/dining room, with a big fire place that separated the kitchen and the bedroom down a hallway to the left.  Giant picture windows front and back with a TV console that divided the living room from the dining room area.

For those who don’t know what that is, it was a combination TV and stereo in a cabinet.

My sister and husband leave and all three kids were in bed.  I was on the couch backed up to their living room picture window with full view of the hallway to my left and watching something on TV.

Phantom Footsteps in the Night

Some time during my show I suddenly I hear my oldest nephew’s distinctive sounding footsteps coming down the hall.  He was a bit on the husky side and had this shuffling gait that was uniquely his.  I quickly look, no nephew.  I jump up, concerned, because he would sleep walk.  His sleep walking had led to an unpleasant incident that involved him and the refrigerator which I won’t go into.  Suffice it to say I had to keep a close eye on him.  I turn on the light in the hall then rush to look into the kitchen, no nephew.  Good thing, refrigerator is safe.  I move down to the next door leading into the bathroom, hmmm, no nephew.  I move down to the third door, their bedroom.  Open door slowly and quietly.  Nephew and other nephew sound asleep in bed.  Phew, good!  Return to the living room and my show.

I’m getting caught up on what’s happened on my show when, once again, I hear his shuffling footsteps.  Look down hall, no nephew, head down hall, refrigerator, bathroom, bedroom.  Nephew sound asleep in bed.  This same exact scenario happened at least another two times leaving me baffled.  When my sister and her husband return home, I decide not to say anything.  Don’t want them to think they were letting a crazy girl watch over their precious children.

I lasted about two weeks before I finally couldn’t take it any longer.  I blurted the story out to my sister who started laughing.  She explained to me it was almost a nightly ritual for her to either hear him herself or her husband waking her and saying he’d heard him.  At that point she’d jump out of bed to go get him only to find him, as I did, asleep in bed.

Is it possible some people are so alive and so full of personality they leave an impression of themselves like a recording? Or could he have been astral projecting while he was asleep?  We’ll never know but my sister often wondered what it must be like for the new owners of her house and the phantom footsteps.