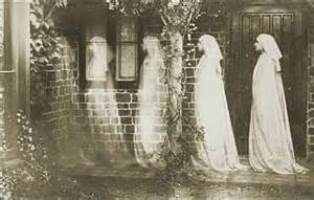 Doppelgangers, what are they?  Have you ever run to talk with someone you saw and find they’re no where to be found?  Or you’ve been talking to someone in the other room only to have them walk in the front door?  A wee bit disconcerting to say the least, am I right?  Well, they’re called “doppelgangers” and I and others in my family have had a few experiences with them.

My ex husband and I owned a house for many, many years.  It was our second house together and when we moved it became one of our rentals.  The duplex apartment we were renting our son got too small when he married and had a baby.  We decided to move them into our rental house.  First, though, we had to do some much needed upgrading and cleaning.

One day, while working there, I looked out back and saw two men heading toward the front yard.  One was blonde, slightly built, jeans and a flannel shirt.  The other was about the same size and build but with darker hair, wearing a white tee-shirt tucked into his belted jeans.  Something about his look made me think old fashioned but what did I care?  Before I could get outside the guy in the flannel shirt came and knocked on our back door.  He explained he was scouting locations for signs and our property was on a very busy road.  I interrupted him and asked where the other guy was.  No, no one was with him, he was alone.  He thanked me and walked away.  As soon as he left I went to the front of the house and satisfied myself no one was there.  It was empty.

I shrugged the incident off and went on with the work.  A few days later I was in the kitchen working when an exterminator we had hired came to the door.  He let me know he was there and would be working outside.  I said great and went back to what I was doing.  A few minutes later I saw someone in a white outfit walk by the large kitchen window and thought it was the exterminator in a white hazard suit.  I could only see him from the chest height up but, again I wasn’t paying close attention and went back to work.  A few seconds later there was a knock at the door, it was the exterminator in a blue overall.  Wait, didn’t he have on a white hazard suit?  No, this is the overall he always works in.  Hmmmm.

I told my daughter in law, shortly after they moved in, I’d seen this guy a couple times in the yard while working on the house.  She immediately responded “Me too!”.  She’d been doing dishes and glanced up because she saw movement.  The sink is on the opposite walls from the windows so I’d put mirrors there.  She said she saw a guy with a white tee-shirt walk past.  She’d also seen him in the yard where I’d seen those two guys walk by and he had on jeans and a white tee shirt.  That’s when it dawned on me that what we were seeing.  It was the alter ego of my husband from when we lived there.  He loved that house and was always working around the yard and, you guessed it, he always wore jeans and a white tee-shirt!