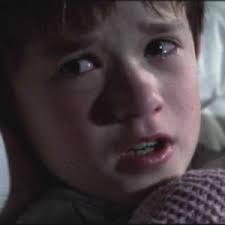 Dead people, they’ve been seen by my daughter since she was little.  Her two children and my son’s daughter do as well. This is a sensitive subject for some people.  It’s also hard to approach without offending someone somewhere along the line. Suffice it to say I’m not even going to try not to. If you’re an adult you can stop reading this or just deal. With that disclaimer out of the way let’s get to the nitty gritty.  Let’s talk about children who experience the paranormal and how you might choose to deal with it.

No See, No Believe

I’ve seen many paranormal TV shows where the parent’s reaction to their child’s paranormal experience is disbelief. They quickly admit going into immediate denial and then chalk it all up to an over active imagination, dreams, etc..  Many go as far as telling their child what they were experiencing never even happened. Nice job mom and dad! I think you can tell this all pisses me off to the max so I’ll move on.

Growing up I had experiences of my own and was too afraid to let anyone know what was happening.  I can’t say  specifically why I wasn’t willing to share my terror.  For some reason it wasn’t something I felt safe doing. I don’t know for sure if my experiences were real or were due to an over active imagination.  Regardless of their validity they left an indelible mark on my life that I remember to this day. I determined long ago my children would have 100% of my support should they come to me with stories of ghosts or goblins.

The first indication that my daughter was a little different came when she was three years old. I was driving with my friend Sharon next to me and my daughter was in her car seat behind us. My friend and I were talking, everything was normal.  Then my daughter says, “I want to go and be with my other mommy!” and starts crying.

I looked at her in the rear view mirror and said, “But honey I am your mommy.” With tears streaming down her face she looked at my reflection and said, “No, my OTHER mommy. She misses me and wants me to come back to her!” This experience definitely shook me up but I had absolutely no doubt she was experiencing a past life in that moment and time. All I could do was ride it until it ended which, thankfully, was just a small distraction away. She never brought that up again but I and my friend will never forget it.

Around this same time she came and told me about the girl in her bedroom window who was bothering her. Again, I didn’t question her sanity or her imagination.

I asked her to show me where the girl was. She took me to her window and pointed saying she sits right there and stares in at me and she’s mad. Since her window is level with the roof on the garage just below, a little girl sitting in her window was completely plausible though discomforting. I asked her why was she mad. “Because I’m playing with her little brother and she doesn’t want me to.” was her response.

So now we have two ghosts, a little boy and a little girl. Next question: What do they look like? Without hesitation she tells me the girl is older, she’s wearing a dress, has long blonde curly hair. The little boy is in shorts with suspenders and a white shirt and he has dark hair. I don’t remember if they had names or not or if I even asked. I did ask if she wanted to get rid of the girl and she said no not right now so I figured as long as she’s comfortable I wouldn’t get too worried.

Some time after finding out about her friends, she was sitting in the seat next to me in the car. She told me she felt uncomfortable with the sister and brother because they were always fighting and it wasn’t fun any more. At this point I had a few choices.  I could intervene and take care of the problem for her or I could give her direction in how to do it herself. Choosing to teach her seemed the most prudent so I instructed her to tell them they had to leave and they not come back. She curled up into a little ball and started talking softly. A few minutes later she put her knees down, looked up at me and said, “They’re gone.” And that was the last time she ever mentioned them.

Life and Death Go On

Since that experience she’s had numerous encounters growing up.  In her current home she has a couple of ghosts who  have thrown things, appeared as shadows, interacted with her children, taken items and hidden them, all of which she tends to take in stride and tolerance.  Her son is exhibiting the ability and I’m pretty sure her other two will as well.   One thing I do know is she won’t have any problem guiding them in how to deal with their “imaginary” friends into the future.