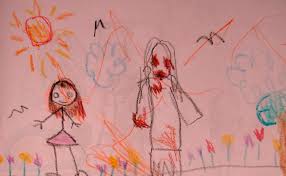 Dead people can be such a drag!

So what do you do when your child draws a picture of someone you know they don’t know.  Or tells you about their new “friend” who you’ve never seen.  What’s the first thing you do?  We tend to react to the fear that’s instantly generated when we see or hear what we can’t understand.  We usually start by asking questions such as  “What is this honey?”, “Who is this honey?”, etc.  Honey tells us about the man who sits on their bed or the kitty walking around their room at night.  Our reaction?  Our reaction tends to be immediate denial.

We quickly chalk it up to a great imagination, something from television, something heard at school, and so on. But some of us have open minds and ask more questions.  We allow the child to share their experiences without judgement or fear.  This accomplishes a few things.  First it makes your child feel okay about what is happening and that they aren’t being bad or naughty.  Also, it allows you, as their parent, to access how serious or not serious the situation is.  Here’s an example.

My son’s daughter was three when she told her daddy about the man in the green suit and purple shoes.  She said he’d come and lay on her bed at night and talk with her.  She described him wearing a bag over his head, a smile drawn on it and a string around his neck.  Pretty specific description and one that would probably horrify any sane parent which, of course, it did.  Quelling his panic he questioned her further.  He found she wasn’t afraid of the man as he was always nice to her.  He never found out how often the man came to see her but she stopped mentioning him after that.

Prisoners are People too

From my granddaughter’s description my son thought perhaps the man was wearing a prison jumpsuit.  He speculates the bag and string meant he’d been hung.  Not exactly a spirit we would want visiting our babies!  However, avoiding panic and hysteria was key in handling this very disturbing situation.  He talked about the spirit as a person, not a monster or a ghoul.  To her, he was a nice person that she enjoyed talking to.  This, in turn, gave him another perspective on this man.  Thinking of the spirit as a person allowed him to speculate he had a little girl of his own.  Perhaps because of how he died he couldn’t move on but missed her?  Maybe the time he spent with my granddaughter was what he needed to allow himself to move on?

Of course, we’ll never know but what’s most important is my granddaughter has no bad memories of him.  Her father handled it with calm and reason which has helped her be open about her experiences.  She is very willing to discuss what’s happening to her because she knows he is willing to listen and help her assess what happened without fear, denial or shame.

There is a lot of good information in the book “Is your House Haunted?” by Debi Chestnut.  You will find an excerpt from this book on how to talk with your children about ghosts